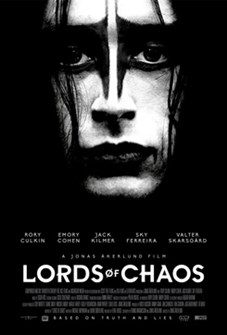 Based on an astonishing true story, Lords of Chaos recounts the exploits of the Norwegian black metal movement’s most notorious band: Mayhem. Its founder, Øystein Aarseth, better known as Euronymous, was one of the originators of the annihilating metal guitar sound that burst onto the scene in the early ’90s. After the gruesome suicide of vocalist Per Yngve Ohlin, who performed under the pseudonym “Dead,” Euronymous used the opportunity to inject a mix of satanism, havoc, and murder into the music to sell more records. Bassist Varg Vikernes began to take Euronymous’s headline-grabbing talk too seriously and went on a spree of church burnings, forming a deadly rivalry between the two bandmates that culminated in an infamous and bloody end.

“A pitch-perfect black metal dramedy about real-life head-bangers who lost their minds.” — Variety